There's a funny maxim floating around out in the sea of Bad Decisions about nothing good ever happening after 2 am but what about after 4 a.m.?  Who knows?  Maybe some kind of awesome fairy floats into your apartment with an awesome wand and flings awesome fairy dust all over you.  Sidenote: I'm pretty sure some poor soul out there has had this happen in the 'After 2 am' time frame with someone flinging something infinitely less awesome than fairy dust over them but in this metaphor it's 4 a.m. and the someone doing the flinging is an awesome fairy and the something being flung is akin to glitter... boring G-rated glitter, ok?  Ok.

So as it's my proposition that after 4 a.m. you're safe from the nothing good ever happening scenarios, it is therefore okay to write blog posts.  I really can't explain why except to say See Above and because, well, it's 4 a.m. and even though I might be covered in awesome fairy glitter my brain still reacts to 4 a.m. about the same.  Slow, sludgy slothdom.  It's about the time to implement the Bullet List - a rather magical device that manages to keep my brain particles from disintegrating and/or migrating into space. 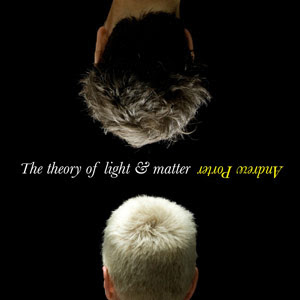 1.  I'm currently reading this really interesting, slightly weird book called The Theory of Light and Matter by Andrew Porter which is, I'm sorry to report, not a quipy satire about quantum physics or space mechanics but is instead a collection of short stories about Surbanites.  I don't know if anyone younger than 70 is allowed to say this but I'm a huge fan of short stories that pack a wallop.  They're kind of like a fly's view [okay scratch that, not a fly because that would be prismatic information overload], more like an ant's view of life.  Seemingly this small microcosm that can have such interminable meanings.  Here's an excerpt from the title story and though I could have chosen a more wallopy passage, out of context it might have seemed merely commonplace which is kind of the crux of the Ant's view.  Anyway:

"I suppose you want to know", he said, putting the kettle on to boil.
"Know what?" I asked.
"Whether you got the equation right."
"No," I said.  "I already know I didn't."
"How can you be sure?"
"I just am," I shrugged. "I fucked it up."
He smiled.  "Tell me, Heather," he said.  "Do you always use that type of language with your professors?"
"No," I said.  "Only when they invite me back to their apartments."
He laughed.
"Was I even on the right track?" I asked.
He shook his head. 'Honestly,' he said "You weren't even close."
Then he smiiled.  "You know, it took me a year to complete that equation.  Dirac himself had trouble reproducing it without notes."
"So what possessed you to give it to us?"
He grinned.  "Arrogance is a physicist's greatest hindrance," he said, taking the kettle off the stove and pouring the hot water into a ceramic pot.  As soon as you think you understand something, you eliminate any opportunity for discovery."
"So if I got wrong," I said.  "I mean, if I wasn't right.  Why did you invite me here?"
He walked into the room and handed me a tea cup.  "Because you were the only one who finished the exam."
I looked at him.
"You were the only one who handed it in," he said.  "That was the test.  And you passed."
"Do I get an A then?"
"No," he said.  "You get some tea."

2. I think I'm about ready to start another blog even though the last time didn't turn out exactly as I thought it would and I scrapped the whole endeavor after just a few short months.  It occurs to me that  being music junkie is largely solitary pursuit especially if you're not at live shows multiple times during any given week or yapping your Saturdays away with other music nerds at the local record shop.  One is usually at home listening at full blast while doing something mundane like the dishes or washing the dog or scribbling away on a computer at 4 a.m. writing random blog posts while the latest Featherface or Yeasayer or insert name here release streams innocuously through those tinny laptop speakers.  Maybe you belong to a mix cd swap club and your fellow swappees are just as equally into music as you are and commit with zealotry but let's face it... when do those actually work anyway???  Maybe you even write a blog about music and if lucky enough to have followers, exchange viewpoints therein.  My point in all of this is I'm ready to connect in a different way.  Hence this wordy behemoth of a post and hopefully with more to come on that a bit later down the road.

3. Tonight a really strange dream woke me  up involving driving through pounding rain on long stretches of a deserted highway en route to a particular local beach, searching for a friend and an obscure exit which was all precipitated by her sending me pictures [in my dreams that is] from friends in need posing with Pekinese pups, druggie rockers wearing vests and hidden boners.  Yeah, I don't get that one either.

4.  I woke up from said dream with Stevie Wonder looping in my head.  At 4 a.m. on a Wednesday it's safe to say I don't want to Boogie On, Reggae Woman.  I do; however, want to do something heinous and possibly illegal to my neighbor's dog who has been whining and barking for the last hour.  If something accidentally and mysteriously happens to him, I plead the fifth.

It's now well past 4 a.m. and my brief vampiric uprising is quieting down.  Boogie on late nighters...

Posted by Genevieve at 5:27 AM

Labels: 4 AM, Chat, Featherface, How Many Times Can You Say 4 AM In One Post, Insomnia, Stevie Wonder, Yeasayer