A Kind of Weakness

Without you my life has become a hangover without end.
A movie made for TV: bad dialogue,
bad acting, no interest.
Too long with no story & no sex.

Is it a kind of weakness
to miss someone so much?
To wish the day would go away?
Like you did yesterday.
Just like you did yesterday.
& I can't think of a way to get through this pain:
To be happy again to make it all alright & I know it must be bad
'cos sitting here right now,
all I know is I can't even think,
I can't even think of anything clever to
say, to say
So I say why pretend any longer?
'Cos I need you here with me.
It's obvious that I miss you so much
so please say you're gonna stay.
Posted by Genevieve at 5:09 AM 0 comments

I watch things like this while you're off doing whatever it is you do to waste time. And then my mind is filled with so many questions....like if we could stop the aging process would you want to live forever? Wouldn't you get bored and tired of everything? And if this does happen at some point how will we survive on an over populated planet that never dies? Would there be regulations on who and how long we could live? Would we then get to choose the day when we died? Would we throw goodbye parties? Watch it on netflix and then you tell me...


Me: It brings questions of defining a life's purpose? Where/how do you find meaning? Personally, I wouldn't want to be immortal in a world of narcissists and sociopaths. This a fictional movie that brings up some other interesting questions. What would you do if you met you?

Them:
I will continue this convo after I watch this movie... (btw I dated a clinically diagnosed sociopath.. and it was one the most honest relationships Ive ever had - I learned that most lies are told because the individual is afraid of hurting the other but if one lacks these feelings then he only speaks the truth.)

Me:
I dated someone who surely was schizophrenic; in the most positive way. We broke up 4 months ago and he was probably the most functional person I've ever met. I miss him greatly but completely understand why he's not able to connect. He sees things in a terrible and astounding way. If I lived in that viewpoint, I'd see it the same way he does too.

Them:
"Have I gone mad?"
"I'm afraid so. You're entirely bonkers.  But I'll tell you a secret.  All the best people are."

https://www.youtube.com/watch?v=XWpWHGdjIhM&feature=youtu.beM
Posted by Genevieve at 12:25 AM 0 comments

Wait...wait... I can't stop laughing long enough to type. I really wish I'd come across this band prior to watching this video.  So many precious video edits, lovers of pristine gothic themes might swoon; it's just a little bit too rehearsed for me.

All assholian mockery aside, I really like the sounds.  Keep me majestically blindfolded and maybe, maybe... very much of the dark ilk so many of us crave.

*On second thought, their imagery is really starting to grow on me.  Like a goth SNL.
Posted by Genevieve at 11:34 PM 0 comments

It's been ages since I picked up a book (and finished it) for the pure pleasure of reading.  Moons have birthed baby moons and those moons have spawned a GenX of new moonies since the time I gobbled words and thrust them promiscuously down my aching throat.  Not for research, not purposeful... merely ephemeral with no thought of anything else but losing my identity in the spun threads of letter tapestries. 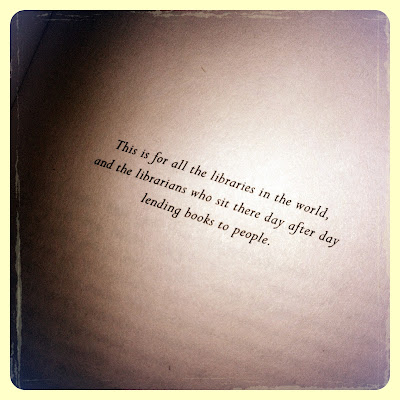 Among Others by Jo Walton - Dedication Page

"I want to be a scientist," she confided.
"A scientist?"
"Yes.  A real one.  I was reading the other day about Lavoisier.  You know?"
"He discovered oxygen.  With Priestley."
"Well, and he was French.  He was an aristocrat, a marquis.  He was guillotined in the French Revolution, and he said he'd keep blinking his eyes after his head was cut off, for as long as he had consciousness.  He blinked seventeen times.  That's a scientist."
She's weird.  I like her.

"Oh dark, dark, dark... those are the pearls that were his eyes... With these fragments have I shored up my ruins."

"I reached out to the knife with my hand.  Whatever else it was, it was wood, and wood loves to burn, burning is in the pattern of wood, the potential fire that is the sun's fire.  The sun was setting, but the wood  leapt to flame, and I was flame, I was a flame contained in my own shape for a moment, and then I was a huge flame.... we weren't near the door to death but I was fire and she was fire and I had the pattern and I loved her.  She was not me, but she was in my heart, she always would be.... and though she was flame she smiled her real smile. ...I opened a space between the flame and where death fell in the pattern, and I hurled her through it, knife and all, and then I closed it up again and sank down, dampened the flame until I was in my own shape again."

"And here I am, still alive, still in the world.  It's my intention to carry on being alive in the world, well, until I die... I'll live, and read, and have friends, a karass, people to talk to.  I'll grow and change and be myself.  I'll belong to libraries wherever I go.  Maybe eventually I'll belong to libraries on other planets...Things will happen that I can't imagine.  I'll change and grow into a future that will be unimaginably different from the past.  I'll be alive.  I'll be me.  I'll be reading my book.  I'll never drown my books or break my staff.  I'll learn while I live.  Eventually I'll come to death, and die, and I'll go through death to new life, or heaven or whatever unknowable thing is supposed to happen to people when they die.  I'll die and rot and return my cells to life, in the pattern, whatever planet I happen to be on at the time.

That's what life is, and how I intend to live it."


Temples 'Keep In The Dark' from Temples Official on Vimeo.

A little brainwashing does a body good.  The Seattle-based ladies of La Luz are beyond adorable.  Quirky, deadpan, twisted - all my favorite things.  That dental floss scene, don't miss it.

Keep a look out for their latest, Weirdo Shrine, to be released in August and tour dates.  I'm super dazzled to be soaking up their brand of surf pop in Austin later next month.
Posted by Genevieve at 2:31 PM 0 comments

The Light, It's My Blood

Listening to much of Gliss these days.  Their raw, dripping, skuzzy, ecstatic guitars meets this delectable tongue slithering/lashing/whispering vocals... Martin and Victoria, you brilliant geniuses.  You've made me fall in love with music all over again.

They're latest,  Pale Reflections, is all the magic you need.   Lovers of all things sleazy, gossamer and haunting.... run, walk, shoegaze your shit over to their site and buy it.  It's GORGEOUS.

They've made it onto NUMEROUS mixes over the years because they're AMAZING.  Don't be weird;  go and gulp their amazingness down your parched throats.  This is oasis.

Come to Texas again, please.  I whisper sweet clutching mantras to you to make it so.
Posted by Genevieve at 3:01 AM 0 comments

Soft Kill's LP Heresy, will be released in October.

Tonight's the night, to live your life

Everything about Gliss' latest album, Pale Reflections, inspires me.  Gossamer, metallic... dripping with all things GLISS.

I've got a beating heart...

And some throwback favorites.

Maybe it's crashing down

We wash it away, this grey
This time is yours and mine
Hear the city sound, see the lonely crowds
This scene is you and me
In the lazy sun, we're the only ones

Posted by Genevieve at 4:43 PM 0 comments

Posted by Genevieve at 2:04 AM 0 comments