A few weeks back I drafted but never posted an entry entitled "Mary's Dying" hoping to somehow share without sharing how it feels that my Alzheimer's afflicted grandmother [who raised me for most of my life] is moving further both geographically and emotionally away from me.  I feel strongly about this.  I'm quite bereft about this stage in her memory, this loved one's final journey.  She is the last parent in my life who remembers my infancy.  She is My Person.  The person who has taught me so much, the Person I love beyond anyone else.

It has been quite painful to remind her, "Love, it's me Genevieve" and to watch her tears flood her age-tissued cheeks when she realizes she no longer recognizes my face or relation.  Many times she thinks I'm her long dead daughter, Rose [my mother]. 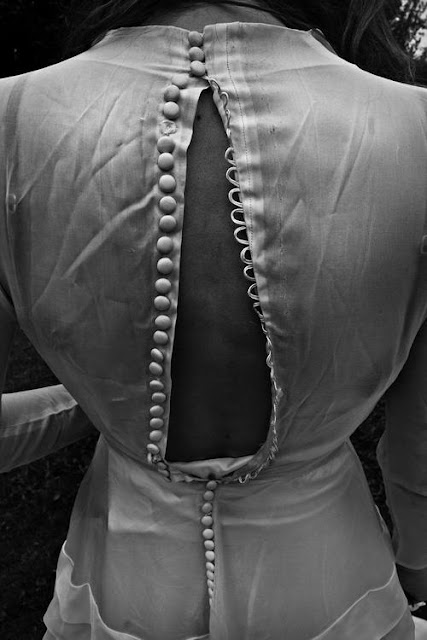 
This ties into feelings of loss that stretch into my past, a past riddled with loss because of many things but which ultimately link to my childhood and mother who, while alive, suffered from schizophrenia and died fourteen years ago.  A death I've only recently made peace with and posted about here but which has most definitely indirectly influenced much of my life's experiences [read choices] since that point... years spent running, chasing, hunting, blood-lusting for bleached bones in others.  A chance to recognize another's haunted spaces.  Moments spent creating and destroying.  In a way I feel like much of the last decade has been spent both hungering for and pushing against these energies.  The lust for home and the push against anything resembling roots.  Hence the advent of a rather silly personal mantra [that my dearests have heard many times]: I don't want to be buried in a box, I fucking refuse to live in one.

Repetitiously,  I've been listening to a mixed tape made about twelve years ago [you can read about why in my temper tantrum rant here] and this phrase from Nick Cave's love song lecture, The Secret Life of The Love Song begins side one and it just keeps reverberating in my mind at the strangest moments in my daily waking life these days.  Life is both cyclical and sarcastic in so many ways.

How beautiful the notion, that we create our own personal catastrophes and it is the creative forces within us that are instrumental in doing this.  Here our creative impulses lie in ambush by the side of our lives, ready to leap forth and kick holes in it.  Holes through which inspiration can rise.  We each of us need to create and sorrow itself is a creative act.

It really is quite a fantastic lecture, I highly recommend a listen, several in fact. He is also fascinated with saudade [as am I: here, here and here] and his thoughts on this and sorrow speaks so closely to my own innerlings [his father died in Cave's late adolescence]. When I listen to him I breathe deeply with a rare peace. Dreaming wise, the other day I had the most visceral interlude that included Wayne Coyne of Flaming Lips.  We had the most powerfully hot sexual exchange.  There were lips, there was hair pulling, there were salty oral exchanges... we were hairless and slippery in all the right places.  I'm guessing his Twitter is finally getting to me... still... nice dream and the feeling of buoyancy upon waking was such a relief.
I don't think it's possible to separate sorrow, sex and love.
Posted by Genevieve at 12:59 AM