One thing I'd like to do this year is stay on top of my internetting and as usual I'm behind answering questions, so here is a recap of some that I've recently answered from my formspring. A lot of these were a lot of fun to answer, thank you very much.

What do you think of love at first sight?

It's a beautiful, passionate collide of planets, sex and emotion. It's shame it doesn't usually last but it doesn't lessen the experience one bit. It really is the most delicious feeling, the first time you lock eyes with someone and you just know, in the pit of your belly [and nether regions] it will be a good time. Not to quote Interpol or anything. If you're in the throes of the experience, don't think... just go with it. It's a rare thing and not something to be dismissed lightly. If it lasts one night, one month or a year, it's worth it.  Now I have to jump off of my lovebox and take a cold shower.

Do you like to travel?
I love to travel! Road trips are my favorite... I like to fly but I also like to smoke my cigarettes.  [Don't smoke kiddies, it's a bad bad disgusting habit.  Cigarettes are not your friends and will not make you look cool.]

I read your favorites and your music taste is great!  I like all of those artists and all of that music (what i know) is so beautiful...since I like your music taste I'll ask you a music related questions.  What artists have you seen in concert? 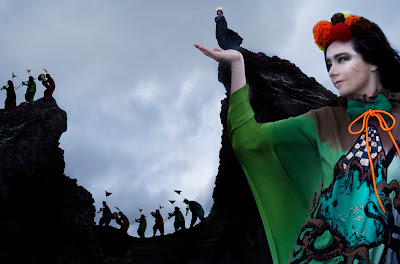 Oh gosh, thanks so much for the lovely compliment! I think my music taste is pretty tame and mundane and I know so many people with "cooler" music than my own, that this really means a lot.

I've seen a lot of bands but not as many as I would like. I try to go to concerts as much as I can afford so there's quite a few.  I'll just list some of my favorites and most memorable. First of all I got to see Bjork twice in 2008 and that was pretty much the most awesome thing for this Bjork Dork.  Radiohead's tour for In  Rainbows was beyond beautiful and also this last year I got to see Mono for the 2nd time and that show blew me out of the water. Their music is practically transcendental. The first concert though that I ever went to was DC Talk. Yep, the Christian band.. but that's a tale for another time. My next favorite concerts were The Magnetic Fields, Interpol, The Epoxies, Echo & the Bunnymen, Deerhoof, The Cure and Crystal Stilts.

[Edit: I also forgot A Place To Bury Strangers and The Big Pink. I'm pretty sure there are a few more and tonight while I'm laying in bed I'll probably have a few doh moments.]

Cats or dogs?
Cats for rugs, dogs for hugs.

If you could only listen to one song for the next month, what would it be?
Tonstartssbandht's Black Country or The Big Pink's Velvet.

Who's the most over-rated actor?
Keira Knightley, Tom Cruise or Angelina Jolie.

What is your favorite book/movie?
Like music, this question is difficult to answer too.

Movies: Steel Magnolias is a very old school favorite as is Legend. I also really like Love Me If You Dare, The Idiots, Sex & Lucia and The Family Stone.

Books: I read an awful lot [though lately not as much as I would like]. I can read and re-read anything by Haruki Murakami, Rosamunde Pilcher [yes I'm an old lady in the body of a younger one], Francesca Lia Block, Amanda Davis and Aimee Bender. I loved Ali Shaw's The Girl With Glass Feet and Middlesex by Jeffrey Eugenides. Recently, I read and though confused by the tone of the book, enjoyed Lev Grossman's The Magicians.

What do you mean when you say you want a sven to take care of everything?
Haha, I forgot about that. It's taken from a commercial and basically means it would be awesome if magically there was a person [in the commercial that person is a very tall, very blond strapping Scandinavian named Sven] that could follow me around updating the weather and reminding me where I put my keys since I'm totally distracted and when I have to be tasky I get super cranky and who wants to be around crankpuss??

Thank you so much for asking questions, now start your own formspring so I can return the favor!

Curious?  Ask me anything.
Posted by Genevieve at 2:50 PM