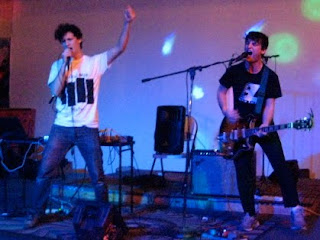 Catchy, distorted punk - it's some of the best coagulated postmodern pop I've heard in awhile. It's like David Byrne and Iggy Pop got together and had pop babies.

Their album, Romance in the New World is available on ITunes, Amazon and via their Myspace which has some FREE downloads.

With shows left in New Orleans, Mobile, Arkansas and Georgia - hope you catch them as their live show is not to be missed!

Boys come back to Texas soon!

Check out this early recording of Concrete Dinosaur.

They also have a Tshirt website called Yellow Elephant. If Iowa is this cool I sense a roadtrip in my future.
Posted by Genevieve at 8:51 PM